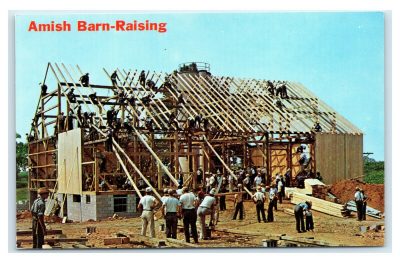 I’ve spent the last 3-4 years studying all the things that prevent building truly affordable housing — meaning housing that is closer to 50% of market price than 80% of the market price. Some communities have been able to work in 4-5 units that meet the guidelines for government subsidies. This, of course, means meeting federal requirements and finding households that also meet those requirements. When a group is coming together and solving the other issues of compatible ideas, location, location, location, and schools, adding on government requirements relating to income windows is not so easy.

What I discovered is that the technology for building a living unit for $100,000 is totally possible. Build smaller, build with manufactured or prefab housing (used to be called trailers). Build Tiny, or build tiny on land where you can add on another tiny later. Infill using land behind and between houses. Some subdivisions have rather large backyards where just as many tiny houses could be built.
The problems to be overcome are construction costs, land costs, zoning, bank reluctance to finance anything outside the mainstream. And, of course, the standard expectations of potential homeowners. It might take some education to see that that market-rate housing is not only not achievable financially but is totally unsustainable. It is totally undesirable.

In 2020, the average size of a single-family home built for sale in the United States amounted to 2,491 square feet. Although in the past five years American homes have been shrinking, since 1975, they have almost doubled in size.
— Statista

Should Anyone Be Living in Today’s Market Rate Housing?

I used to believe that the approach of sneaking low-cost units in the middle of market-rate housing was not the best idea because the market-rate housing would be set the norms and expectations that would continue to pressure those who had chosen a low-cost lifestyle couldn’t or wouldn’t like to compete with. I no longer believe this is necessarily true. Once the community is formed and people know each other personally, they work it out together because members prefer to have a strong community even when not all households are contributing equally financially. “Equal” doesn’t mean “same.” Each person and each household is equal, period.

And the diversity of class also brings people with a diversity of skills and abilities. If the community has professional hikers who are never around on weekends, it needs 9-5 people who are.  So I started thinking in terms of Strong NeighborhoodsStrong neighborhoods have good communications, maintain supportive networks, and are self-organizing and resilient. More. A block or blocks of already built housing perhaps with some lots on which houses have been or should be demolished.Blocks that can be creatively designed with rehab and infill — even closing off a street to free up land. With the increasing number of municipalities allowing ADUs (accessory dwelling units), this becomes more imaginable. A toe in the door.

A fabulous organization that is a model for this is Strong Towns. It has fabulous advice for avoiding improvements that are not improvements, many offered by the federal government, private “donors”, or “free” in other ways. Good budgeting, understanding future costs, community control, etc. So I decided to switch from “Affordable Cohousing” to “Strong NeighborhoodsStrong neighborhoods have good communications, maintain supportive networks, and are self-organizing and resilient. More”. I think in websites so my first move was to change the name of my affordable/low-cost cohousing website to StrongNeighborhoods.info.
But I’ve had little time to keep developing it. Too busy reading brilliant books and listening to Strong Towns webcasts. I haven’t even had time to write book and video recommendations.
The idea of thinking in neighborhoods does bring us back to the early cohousing solution of lot development. The land is acquired and individual households are responsible for developing whatever kind of building the local zoning and community allows. The advantage of this model is that each household can work actively to understand what they need and can afford on an individual level or with other households to build 2 or 3 household units.
The most important element is the burning souls who think in terms of making things work rather than expecting whatever is allowed — what has already been built. Burning souls look for creative solutions and keep at it until they succeed. The fun of that is the process of developing a community of others who have similar values and objectives.
The middle-class solution of building a whole neighborhood of market-rate housing is only available to those earning more than the average median salary — in many cases considerably more than the median wage. The median wage was $67,521 in 2020. The median house price was $374,900 in 2021. For that mortgage, you need at least 10% of the price sitting unneeded in a bank account. The cost of housing should be no more than 30% of income. That would be a minimum of $20,000 a year that is unneeded elsewhere. Mortgage payments plus property taxes, insurance, utilities, maintenance, etc. (If anything will make polygamy legal, it might be house prices.)

One challenge to working out new solutions is finding burning souls in the same geographic area. Housing is location-dependent—period. Perhaps the pandemic has broken the expectation of “you have to be in the office” in order to be helpful. But while it might be less rigid it is still a fundamental need to be near your connections in order to stay connected. Particularly to reduce energy use, people need to live near where they work. And if they have children, it means near schools as well.
So organizing cohousing needs a local base of people who share an aim. The key to staying together and not getting discouraged before you even get started is recognizing that you are already building a community together while working toward a housing solution. It’s just less convenient than when living close to each other. And having a common space is very important. One need that religious organizations provide in neighborhoods is community gathering spaces—places where a whole community can meet together to discuss and share. (Whether they are eating or not.)
Communities are not built for other people but by the people who want to live in them. First, you need some ideas in order to become a burning soul, then you need to find or build other burning souls. How do you get started right now?

The best ideas always seem impossible but only the impossible ones are worth your time.