The Pew Research Center’s Income Class Calculator can be used to determine whether a given household income is in the lower-income, middle-income, or upper-income class. In 2016 when the calculator was written, “52% of adults lived in middle-income households, 29% in lower-income households, and 19% in upper-income households.” The average US household size was 2.5 people so “household” was defined as three people. (I know, “2.5” isn’t “3.” They rounded up. Averages and ranges and middles are hard enough to calculate using whole numbers. With decimals, it’s a nightmare. I round up too.)

After adjusting for the number of people in a household, the calculator will adjust for the cost of living in a specific geographic area. The cost of living and income levels vary widely across the US.

The cost-of-living adjustment for an area was calculated as follows: Jackson, Tennessee, is a relatively inexpensive area, with a price level that is 17.9% less than the national average. The Hawaii metropolitan area known as Urban Honolulu is one of the most expensive areas, with a price level that is 24.4% higher than the national average. Thus, to step over the national middle-class threshold of $45,200, a household in Jackson needs an income of only about $37,150, or 17.9% less than the national standard. But a household in Urban Honolulu needs a reported income of about $56,250, or 24.4% more than the U.S. norm, to join the middle class.

What Does That Mean for Lower-class Incomes? 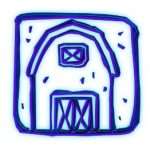 The purpose of Sustainable Cohousing is to focus on developing housing for low-income households. But “low income” changes from one geographic location to the other. That means my sources talk in terms of averages or medians and say “about” a lot.

At this point, it may feel that pinning any of this down is hopeless. It is if you are a literalist. You will go crazy. The only point at which numbers will mean literally what they mean is when referring to a specific piece of land. In a specific place. In relation to the income of the specific person who wants to buy it. On a specific date.

(Also not literal are the various icons that are sprinkled around. Images make pages of text more pleasant. But thinking up an appropriate illustration takes more time than writing the text. And this text took three days. These images are about income from labor, energy production, and stewardship of animals and crops.)